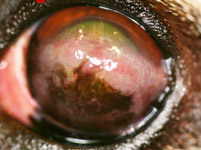 WHAT IS PANNUS? Pannus is a slow progressive degenerative disease of the cornea (the clear surface of the eye). Pannus is characterized by brown or pink tissue on the surface of the eye, which leads to a slow loss of vision. The condition is most commonly seen in German Shepherds, but occasionally is seen in other breeds as well.

WHAT CAUSES PANNUS? The actual cause of pannus is not known, although several factors are thought to be involved:

WHAT ARE THE SIGNS OF PANNUS? Initially, redness and brown pigment may be seen in the sclera (the white of the eye). White infiltrates made up of inflammatory cells then invade the clear cornea, followed by blood vessels. Finally, pink connective tissue grows into the cornea and later becomes brown.

WHAT IS THE TREATMENT FOR PANNUS? Despite intensive research efforts, no permanent cure exists for pannus. However, in the vast majority of cases, pannus may even be reversed and the corneas will clear. The key is instituting therapy early in the disease process. The inflammatory cell infiltrate and blood vessel invasion are generally reversible with therapy. The connective tissue infiltration and pigment deposits are often not reversible once they have occurred.

Medical Treatment: Cyclosporine and Tacrolimus are new medications used in the war on pannus. It comes in the form of drops or ointment which need to be placed in the eyes numerous times daily to start, then gradually weaning down the frequency to the lowest possible dose that will control the symptoms. Cyclosporine and Tacrolimus only work well, however, when used in conjunction with topical steroids. Steroids may be used alone to control pannus, but a combination of the two drugs seems to give the best results. It is important to understand that this is only a treatment, not a cure, and will likely need to be used forever. Even short periods of interrupted treatment (i.e. 2-4 weeks) may cause a severe relapse with worsening of the dog’s vision. Many dogs will clear this pigmented tissue with time but leave behind some scar tissue.

Surgery: Surgery has been utilized in the past when medication did not completely clear the pannus from the cornea. But a “peeling” of the cornea often results in a re-growth of abnormal tissue and scars the cornea.  Therefore, drops need to be used to control the disease. If medical treatment if insufficient your pet can be referred for beta radiation therapy.