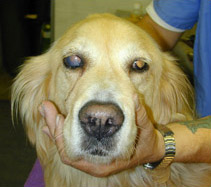 Glaucoma is a progressive neurodegenerative disease related to an increase in the intraocular pressure of the eye resulting in partial or complete blindness and pain from permanent damage to the retina and optic nerve.

Glaucoma can be congenital, hemorrhage, hereditary or secondary to inflammation, infection, autoimmune disease, dislocated lens or from tumor formation inside the eye.

Primary glaucoma is the most common form of glaucoma seen by veterinary ophthalmologists today.

Cells inside the eye behind the iris, called the ciliary epithelium, continuously make the fluid (“aqueous humor”) that fills the front portion of the eye. Glaucoma develops when the normal flow of this fluid out of the eye is impaired. In most cases, this is caused by a hereditary defect where the filtering mechanism (“filtration angle”) around the periphery of the iris is blocked off. This is referred to as “primary glaucoma” and is most commonly seen in purebred dogs such as the Cocker Spaniel, Basset Hound, Bouvier, Springer Spaniel, Beagle, Shar Pei, Chow Chow, as well as many others. “Secondary glaucoma” refers to increased pressure in the eye due to other diseased such as anterior uveitis (inflammation inside the eye), lens luxation (dislocation of the lens from its normal position), and hyphema (bleeding inside the eye).

WHAT ARE THE SIGNS OF GLAUCOMA?

Endoscopic Cyclophotocoagulation (ECP) is the newest therapeutic modality in the fight against canine and feline glaucoma.

A retrospective study of 115 cases reports 90% improvement controlling IOP over a
3 year period (compared to 58% to 76% control of IOP with Transscleral Cyclophotoablation after 1 year) and a 75% success rate for maintaining vision up to 3 years (compared to 37% to 41% with TSCPC after 1 year). In 87% of the cases we are able to lower glaucoma medications post-operatively.

Success depends on early detection of glaucoma before or shortly after vision loss occurs. Increased size of the globe (buphthalmos), episcleral injection (red eye), pupillary dilation, bluish haze of cornea (corneal edema) and sudden vision loss are signs of glaucoma clinically. Use of applanation or rebound tonometry by the referring veterinarian and immediate referral to a veterinary ophthalmologist can improve chances of saving the pet’s vision.

ECP employs an endoscopic camera with a xenon light source and a delivery system of visualized diode laser application to specifically targeted tissues inside the eye using a 20 gauge probe. The procedure is projected onto a medical grade 14 inch monitor.
Selective application of the laser to targeted ciliary processes responsible for production of aqueous humor allows control of intraocular pressure (IOP).

Removal of the intraocular lens by phacoemulsification is needed to perform ECP. An artificial lens is inserted in the lens intracapsular bag and a gonioimplant is placed to prevent pressure spikes that may occur over the first two weeks post-operatively.

Other uses for endolaser are exploratory surgery of intraocular tumors of the iris and ciliary body visually observing the intraocular mass, intraocular lasering of the mass endoscopically in some cases, retinopexy in lens luxation surgery (intracapsular lens extraction- ICLE), visual placement of artificial lenses sutured into the ciliary sulcus for ICLE, and ECP combined with phacoemusification surgery for cataracts in high risk patients for post-operative glaucoma such as Labrador Retrievers and Boston Terriers.